The Common Raven (Corvus corax) is a native bird that is of the genus Corvus. They are well adapted to living around people. Ravens are among the smartest of all birds, even solving complicated problems posed by creative scientists. They are very acrobatic fliers, often doing rolls and somersaults in the air. Sometimes young ravens will play games with sticks, repeatedly dropping them, then diving to catch them in midair.

Raven populations are increasing. Because they adapt well to human disturbance and land development, they are adept at utilizing resultant food, water, and nest-site subsidies. . The construction of overhead utility lines and transmission towers influence raven populations by providing elevated perches and nesting substrate in areas where tall perches otherwise are rare.

Raven observations during annual breeding bird surveys on the INL Site have steadily increased over the past 30 years, mirroring trends across western North America. In sagebrush steppe landscapes of western North America, greater sage-grouse nest success can be affected by raven predation. Ravens prey on Sage-grouse eggs and chicks and consequently may directly impact Sage-grouse, which DOE-ID is striving to conserve in partnership with other federal, state, and private stakeholders.

Sage-grouse have the lowest reproductive potential of the upland game birds, and nest success and chick survival may be the most critical factors limiting recruitment in sage grouse populations. Direct mechanisms include reduced nest success through the predation of eggs and chicks. Simply measuring predator density and direct mortality rate does not, however, provide sufficient information to assess the effects of predation. The perceived risk of predation and can produce behavioral and physiological changes that indirectly suppress a species. Anti-predator behavior such as increased vigilance may reduce the opportunity for other activities such as foraging, effect habitat selection, interfere with incubation rhythms and cause nest abandonment.

Ravens and the CCA

In the sage-grouse CCA, DOE-ID committed to support research aimed at developing methods to deter raven nesting on utility structures. Later, this scope broadened into a commitment from DOE-ID to work with INL contractors and others to opportunistically reduce raven nesting on any anthropogenic structure, including power lines, towers and structures at facilities. The DOE-ID continues to recognize the value of research that would improve its ability to deter raven nesting on lines, but it also recognizes that some Raven nesting on towers and at facilities could be deterred by simple methods employed at appropriate times. Hence, DOE-ID now encourages ESER to collaborate with contractors and the National Oceanic and Atmospheric Administration (NOAA), to seek opportunities to reduce the suitability of any human structures most likely to be used for nesting.

In support of the original CCA conservation measure to develop effective nest deterrents, and the recently expanded scope, ESER established and continues to operate an annual raven nest monitoring program. Under this monitoring program, nearly all infrastructure on the INL Site are monitored during April and May when ravens typically build nests and care for eggs and chicks. The purpose of the task is three-fold: 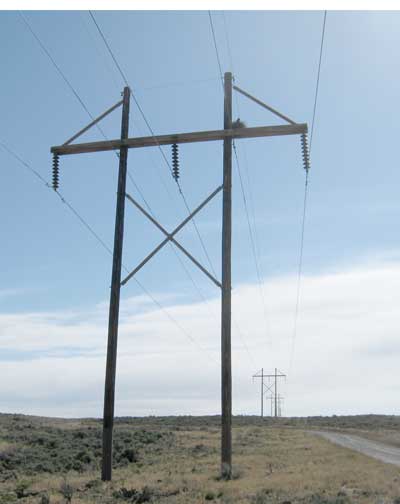