If you see a rattlesnake in southern Idaho, it is most likely a Great Basin rattlesnake. There are thousands of these rattlesnakes on the Department of Energy’s Idaho National Laboratory, or INL, but it is rare to see one, even for people who spend their days working outdoors. The snakes blend in well with their surroundings and try to stay hidden to avoid predators, including humans.

A rattlesnake usually only strikes a human for defense and as a last resort. A rattler will generally try to escape to avoid a potentially dangerous situation. When a rattlesnake feels the need to defend itself, it often will first coil and rattle its tail in an attempt to ward off enemies. 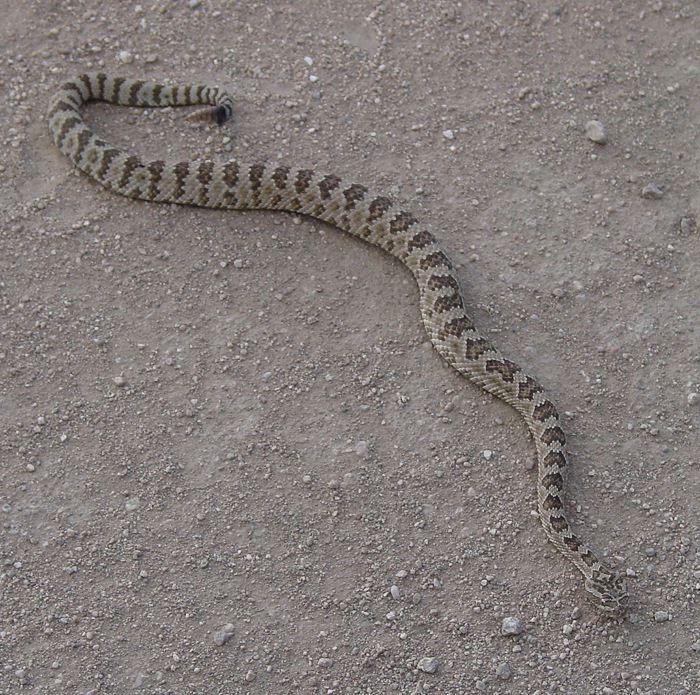 Although rattlesnake bites are potentially deadly, less than one quarter of one percent of rattlesnake bites are fatal. Fatal cases occur when there are several bites; when the snake injects venom directly info a blood vessel (this is extremely rare); or when the victim is very young, very old, already in poor health, or has consumed alcohol. Several circumstances make a rattlesnake bite even less likely to be fatal. Often the strike may miss entirely, or the fangs will not fully pierce a person’s skin, or the snake may simply not inject venom.

A full-sized rattler can strike about half the length of its body. A typical full-grown rattlesnake on the INL is between 3 and 4 feet long. Despite rumors, a rattler cannot leap into the air and will not chase people.

Rattlesnakes are sensitive to even unintentional human disturbance. This sensitivity is greatly compounded by our fear and hatred of snakes which leads people to intentionally kill rattlesnakes. Rattlesnake populations are declining over much of their range, but in comparison to elsewhere in the US, rattlesnake populations on the INL appear to be relatively healthy. This is likely due to a lack of human disturbance on the protected site.

If you hear a rattler, don’t try to kill, provoke, handle, or disturb it. All of Idaho's reptile, including rattlesnakes, have been listed as protected non-game species with the state. A protected non-game status means that people can't kill or possess the species unless state law and commission regulations allow it. Fish and Game notes Idaho law allows the killing of the non-game species if they endanger human health, safety or property.