Black-tailed jackrabbits (Lepus californicus) are common in the western United States and northern Mexico. Early settlers called them “jackass rabbits” because their ears resembled those of a donkey (jackass). This name was later shortened to jackrabbit. There are four species of jackrabbit in North America. The most common, and the one seen most often in southeastern Idaho, is the black-tailed jackrabbit. 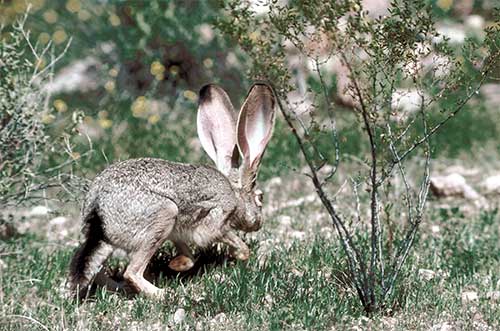 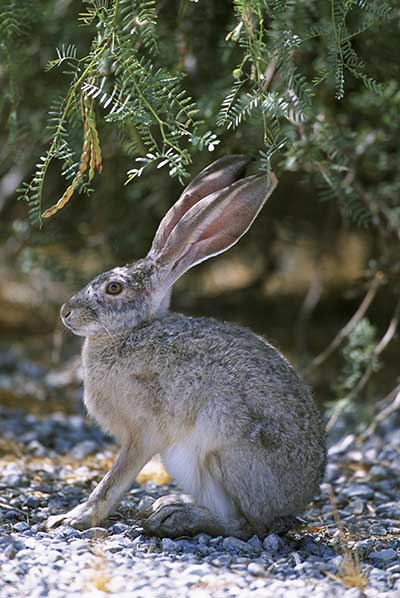 Because black-tailed jackrabbits prefer an arid habitat, they have several adaptations that help them survive in a hot and dry environment.

Black-tailed jackrabbits are mostly nocturnal. They live in open habitat and run to escape predators rather than hiding in the woods like the rabbit does. The jackrabbit’s large eyes are placed back on the head so he can see in front, behind and overhead at the same time. Their keen sense of hearing helps them be aware of their surroundings and potential danger and they rely on their speed to escape from predators such as coyotes, bobcats, foxes, horned owls, hawks and snakes. When threatened, they first freeze, laying their ears over their backs and blending their long, lean bodies into the surroundings. If the vanishing act fails, they leap away in 20-foot bounds at speeds up to 35 miles per hour. When trying to evade predators, a jackrabbit moves in a zig-zag pattern.

The jackrabbit’s large ears also help the hare keep cool. The blood vessels in the ears expand to allow the blood to cool before re-entering the body. The jackrabbit can also decrease the blood flow through its ears in the winter to stay warmer.

Jackrabbits do not dig burrows. Instead, they spend the hottest part of the day resting in a bed scratched out at the base of a shrub or in a clump of tall grass where the shade will protect it from the heat. In the winter, a jackrabbit builds its nest under thick foliage that protects it from harsh winds.

The black-tailed jackrabbit is an herbivore. In the summer they eat mostly green plants and flowers that are high in water content, so they do not require much water. They will also eat sagebrush and cacti. In the winter, they don’t hibernate, and mainly eat shrubs. Jackrabbits are constantly eating and consume large quantities of food relative to their size. Fifteen jackrabbits eat as much food as a large grazing cow in one day. In agricultural areas the jackrabbit may become a pest to farmers by eating their crops.

Rabbit populations generally follow a cyclic pattern of high and low population numbers. According to survey data, jackrabbit populations on the INL appear to peak every 10 or 11 years. Populations increase to great abundance and then suddenly decrease for unknown reasons, but disease, food shortages or an increase in predators may contribute. Their populations recover quickly, however, because they are such prolific breeders. A female jackrabbit may bear three to four litters per year with up to eight young per litter. Leverets reach adult size and are able to breed in about seven to eight months.