To assess bat activity and species occurrence at critical features, a program of passive acoustic monitoring of bat calls was initiated by ESER in 2012. In 2019, ESER continued monitoring bat activity using acoustical detectors set at hibernacula and other important habitat features (caves and facility wastewater ponds) used by these mammals. Analysis of the acoustic data set was initiated in 2015 and continued in 2019. To date, approximately 7.7 million ultrasonic call files have been collected. This is the largest continuous dataset in Idaho and likely the western U.S. Over 916 thousand ultrasonic files were collected during the 2019 monitoring season; more than 466,000 of these files were recorded at facilities, the rest at caves and other remote sites. On-going monitoring efforts show consistent patterns. Summer resident bat community appears to consist predominantly of Western Small-footed Myotis, Townsend’s Big-eared Bat, Big Brown Bat, and Western Long-eared Myotis with some little Brown Myotis and Silver-haired Bat detected at moderate levels at a few locations. Low levels of summer activity of Hoary Bat were detected through the summer at many features. Western Small-footed Myotis was the most commonly detected bat at all surveyed features. Little Brown Bats are more commonly detected at facilities than at cave sites.

Typical Passive-acoustical Monitoring Station for Bats with a Microphone Mounted at the Top. (These devices record the echolocation calls of bats and were installed at cave openings and facility waste-water ponds.)

The Importance of INL Caves

At least 17 out of 23 caves that are known to exist on the INL Site are used by several species of bats for winter hibernacula, as well as for summer day and night roosts. Lava caves are also an essential habitat during most of the year for three resident species. Much of the historic information concerning bats on the INL Site comes from research that has centered on counting and trapping at caves. In addition to being used as roost and hibernation areas, caves also provide habitat for concentrated patches of insect prey for these mammals. Indeed, in a number of cases, cold-trap crater caves that are too cool during summer to serve as day roosts will have high levels of evening activity as bats focus foraging at these sites. Beyond their use as roosts, caves at the INL Site serve as important habitat features for summer resident bats. Additionally, preliminary surveys indicate that caves may be used as stop-over habitat during fall migrations by previously undocumented forest bats, such as the Hoary Bat. Very little is known about the use of caves by migrating forest bats, and these areas may provide vital resources as bats traverse atypical habitats.

Currently, monitoring of hibernating bat populations is conducted biennially by ESER wildlife biologists at nine known INL Site hibernacula. Surveys are conducted in coordination with Bureau of Land Management and IDFG surveys conducted across the region. INL Site caves are scheduled to be counted during even year winters.

To date, Townsend’s Big-eared Bat is the most commonly counted over-wintering bat species, with western Small-footed Myotis being the second most common, but with far fewer numbers. A total of 487 Townsend’s Big-eared Bats and 51 Western Small-footed Myotis were counted during our most recent (winter 2017-2018) hibernaculum counts. Historically over-wintering Big Brown Bats have been encountered, but not during the most recent surveys.

Passive acoustic monitoring at long-term stations operating at caves and facilities are revealing patterns of bat activity across the INL Site. An analysis of passive acoustic data collected at remote site (caves) and facility ponds indicated high variability and distinct patterns of activity across seasons with clear differences between developed and natural areas. Developed areas with anthropogenic structures (facilities, bridges, and culverts) are used as habitat by bats on the INL Site as well as natural areas. Developed areas, and their associated lands, occupy about 0.38% of the INL Site. Some of these facilities were constructed in the 1950s, and are surrounded by mature landscaping trees and wastewater ponds, which provide bats with vertical-structure habitat, water, and foraging areas. Patterns shown in the figure at right reveal good levels of summer activity at both developed and natural sites. May and August peaks at facilities reveal transient use at facilities as bats move back and forth between summer and winter habitats. Many of these transient bats are migrating tree bat species, likely using facility resources (landscaping trees and surface water) as stopover habitat. High levels of activity from July through September at caves indicate these areas are important activity centers for resident bats and also serve as pre-hibernation gather sites (swarming sites). 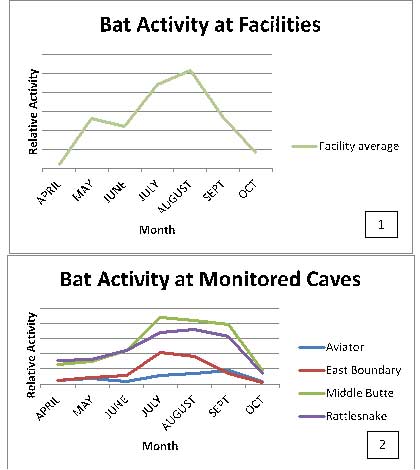 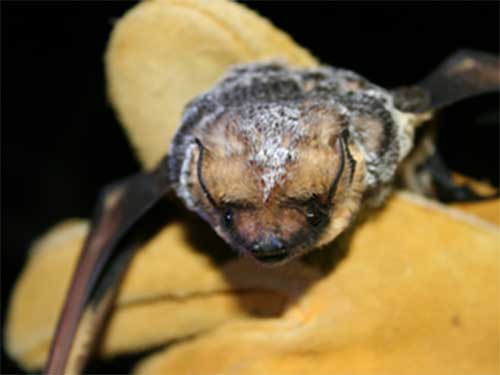