Past Research on the Idaho NERP

Since the pioneer days, coyotes have been killed regularly throughout the western United States because of their depredations on domestic animals. Millions of coyotes in the western United States have been destroyed, yet the coyote problem still persists today. Studies have shown that not all coyotes kill sheep and social status is a key factor of those that do. This study will track the movements and hunting behavior of alpha (dominant), beta (younger adult offspring) and transient (searching for a mate or territory) animals so that more specific control methods may be employed.

Coyote research conducted previously has contributed significantly to our knowledge of the species. However, our understanding of information specific to the depredation of livestock is lacking. It is known that not all coyotes kill sheep and social status is a key factor of those that do. This fact is supported by several studies from Utah and California, showing alpha coyotes (the dominant breeding pair) to be almost exclusively responsible for killing sheep. Furthermore, evidence from a number of studies show that coyotes of alpha status are more difficult to capture within their home-ranges than either beta or transient coyotes, suggesting unique behavior. 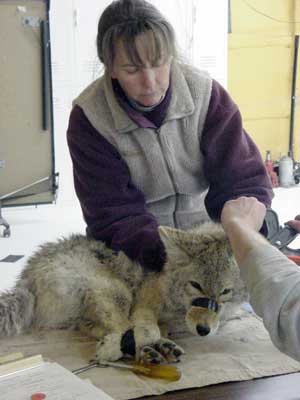 The recent petition for Endangered Species Act (ESA) listing for pygmy rabbits was, in part, based on a perceived decline in the species, however, data to evaluate this supposition are not available. Efforts during the past 2-3 years have documented numerous new occurrences of the species in Idaho, which have helped to fill out the statewide distribution of pygmy rabbits. However, it is not known if populations of pygmy rabbits fluctuate or cycle, as documented in other lagomorphs, and some observations suggest that populations may shift across a landscape over time. Therefore, an understanding of population trends over time requires information on changes in both abundance and distribution. This work addressed the first of these population criteria. 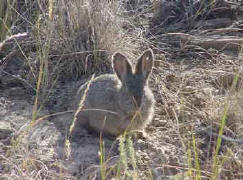 Monitoring burrow systems over the past 7 years in the Lemhi Valley has documented marked fluctuations in density of active burrows, which likely reflect fluctuations in population density of rabbits. Although burrow entrance counts are commonly used to estimate population abundance for semi-fossorial mammals, this relationship has not been evaluated for pygmy rabbits. Our work investigated the relationship between density of burrow systems and density of rabbits, and used this information to evaluate an index of rabbit abundance that could be employed by wildlife biologists to monitor changes in abundance of pygmy rabbit populations over time.

Accomplishments through 2009 Since winter 2006, we have surveyed 551 16-ha plots that were selected based on a stratified random design (i.e., more random points were selected in “good” habitat than in poor habitat or in areas that have recently burned). We documented 1,141 burrow systems since 2006, and found at least one active pygmy rabbit burrow system on 31 percent of surveyed plots (n = 170 plots, range = 1 – 38 burrow systems per plot. During the winters of 2006 and 2007, our surveys were restricted to the southeast corner of the Site, and, on average, 52 plots were surveyed each season. Fall 2007 marked the beginning of Site-wide sampling, and so data collected from that point on represent a more accurate description of pygmy distribution across the entire Site. In fall 2007, pygmy rabbits occurred on 37 percent of surveyed plots (n=244). In contrast, in winter 2009 only 12 percent of plots had active burrows (n=178). During fall 2009, plots with active burrows comprised 44 percent of sampled plots (n=25). Because analysis of these data is pending, we cannot yet offer an explanation for why the number plots with recent pygmy rabbit activity is so much lower in winter 2009 than in other seasons. It is possible the population experienced a sharp decrease in numbers in winter 2009 similar to what happens in other rabbit species. Further analyses are required, however, before such statements can be verified.

Shallow land burial is the most common method for disposing of industrial, municipal, and lowlevel radioactive waste, but in recent decades it has become apparent that conventional landfill practices are often inadequate to prevent movement of hazardous materials into groundwater or biota. Most waste repository problems result from hydrologic processes. When wastes are not adequately isolated, water received as precipitation can move through the landfill cover and into the wastes. Presences of water may cause plant roots to grow into the waste zone and transport toxic materials to aboveground foliage. Likewise, percolation of water through the waste zone may transport contaminants into groundwater. 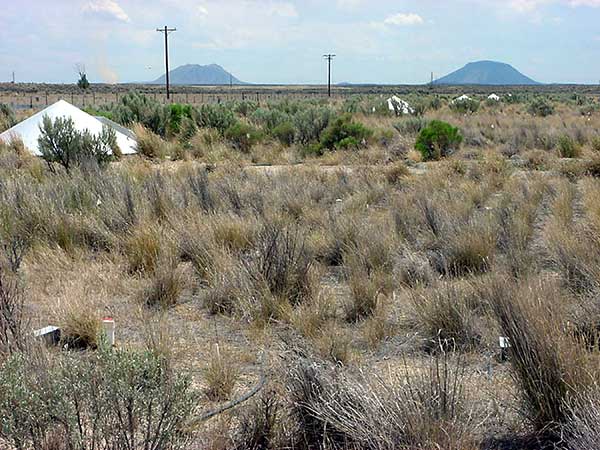 In semiarid regions, where potential evapotranspiration greatly exceeds precipitation, it is theoretically possible to preclude water from reaching interred wastes by (1) providing a sufficient cap of soil to store precipitation that falls while plants are dormant and (2) establishing sufficient plant cover to deplete soil moisture during the growing season, thereby emptying the reservoir of stored water.

The Protective Cap/Biobarrier Experiment (PCBE) was established in 1993 at the Experimental Field Station, INL Site, to test the efficacy of four protective landfill cap designs. The ultimate goal of the PCBE is to design a low maintenance, cost effective cap that uses local and readily available materials and natural ecosystem processes to isolate interred wastes from water received as precipitation. Four evapotranspiration cap designs, planted in two vegetation types, under three precipitation regimes have been monitored for soil moisture dynamics, changes in vegetative cover, and plant rooting depth in this replicated field experiment.

PCBE Summary Report (Evapotranspiration Caps for the INEEL: A Summary of Research and Recommendations)

The Protective Cap/Biobarrier Experiment: A Study of Alternative Evaportranspiration Caps for the Idaho National Engineering and Environmental Laboratory 2002