Current Research on the Idaho NERP


Studies of Ants and Ant Guests at the INL Site 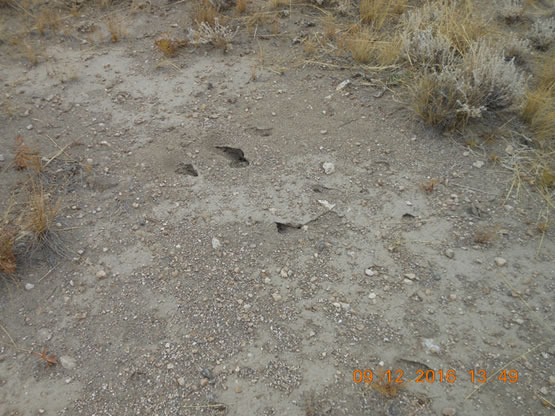 Past studies of William Clark and Paul Blom are the basis of a study of ecological relationships between some of the ant taxa at the INL Site and a variety of ant guests.

One such ant guest taxa, a desert beetle (Coleoptera: Tenebrionidae, Philolithus elatus) was collected in Pogonomyrmex salinus nests and is the subject of the study and description. Photographs using light and scanning electron microscope were taken, and a Philolithus elatus female ovipositing on a Pogonomyrmex salinus nest was observed. The results of this study will be published in the future.

An undescribed species of Jerusalem cricket (Orthoptera: Stenopelmatidae, Stenopelmatus sp.) has been found at the INL Site. The Stenopelmatus was found in the ant nests during previous fieldwork. A series of live individuals, including both males and females, were needed for a proper species description. Live specimens were collected in July 2013, and additional specimens were collected during September 2014. In addition, one specimen was found in one of the excavated ant nests. They have been shipped to the specialist in the group for rearing and description. This relationship will require more study during future visits to the INL Site. 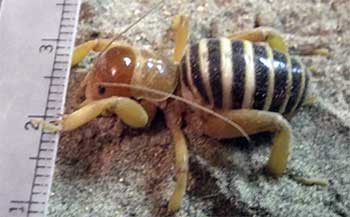 In addition, during 2015, field observations of predation on Pogonomyrmex salinus were made, and this turns out to be a different spider species as predator of the ant from what we have previously reported for the site (Clark and Blom 1992). The spider has since been identified as Xysticus, a member of the family Thomisidae (crab spiders). This family and genus are likely new records for the INL Site and are predators on Pogonomyrmex salinus.

Field research will continue into the foreseeable future.

The Great Basin Rattlesnake, Crotalus oreganus lutosus, is arguably the most abundant snake species on the INL Site. Because of research conducted by the Idaho Herpetological Laboratory at Idaho State University over the past three decades, the ecology of this snake is well documented. Great Basin Rattlesnakes form aggregations of sometimes several hundred individuals for overwintering underground. During their activity season, Great Basin Rattlesnakes make a lengthy migration away from and back to the overwintering site. The migratory routes taken are used for foraging, finding mates, and gestation by pregnant snakes. One component of this activity we know relatively little about is, what are the defining attributes of gestation sites chosen by pregnant snakes and if, and how, naïve newborn rattlesnakes born during the summer return to communal overwintering sites.

In 2018, a project was initiated on the INL site to locate gestation sites used by pregnant Great Basin Rattlesnakes and to conduct a preliminary radio telemetry of a few individuals and their corresponding offspring. Results indicate that pregnant snakes utilize rocky outcrops or large individual rocks for gestation. Eighteen different gestation sites were discovered in the southeastern portion of the INL site. Physical attributes (e.g., length, width, thickness, etc…) of these gestation rocks and nearby random rocks were measured and suggests that gravid females are not randomly choosing rocks for gestation but rather selecting rocks with certain attributes that may make them suitable for gestating young. In 2019, these gestation rocks and additional gestation rocks were measured for their thermal properties to test if pregnant snakes may be choosing rocks that maintain specific temperature ranges. Thermoregulation at appropriate temperatures is a leading hypothesis regarding the selection of gestation sites by pregnant snakes. 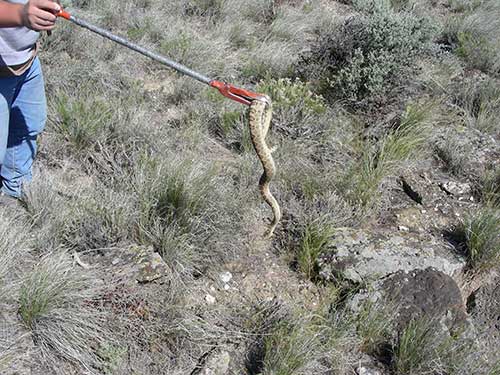 Two additional observations from this research are noteworth. One suggests that the American Badger, Taxidea taxus, may be a primary predator of gestating Great Basin Rattlesnakes and their newborns. Three of the 18 gestation rocks showed evidence of soil excavation consistent with American Badgers digging, and at two of those rocks the occupying female had been killed. This suggests badgers may be able to specifically target gestation sites for foraging. Second, is that during rain events Great Basin Rattlesnakess would exhibit rain-gathering behavior. In addition to the Great Basin Rattlesnakes observed drinking, 8 gopher snakes (Pituophis catenifer) emerged from underground or from under rocks to drink pooled water. Such unified behavior suggests that the drinking of free water during sporadic rain events is significant for snakes within the Snake River Plain and the INL site.