The Long-Term Vegetation (LTV) Transects and associated permanent vegetation plots (see map below) were established on what is now the Idaho National Laboratory (INL) Site, in 1950 for the purpose of assessing the impacts of nuclear energy research and production on surrounding ecosystems. Vegetation abundance data were first collected in 1950 for inclusion in an ecological characterization of the Site. Samples of plant and animal tissues were also collected from these plots and analyzed for radionuclide concentrations on an annual basis for several years. The effort to collect tissue samples was eventually discontinued because the effects of fallout from nuclear reactors were determined to be negligible, at least in terms of radionuclide concentrations in the environment. However, collection of vegetation abundance data has continued on a regular basis for nearly sixty years.

The data generated from the LTV Transects comprises one of the oldest, largest, and most comprehensive vegetation data sets for sagebrush steppe ecosystems in North America. Since their establishment, the LTV Transects have been used extensively for various tasks to support the INL Site mission and have been the basis for major milestones in understanding practical and theoretical ecology of sagebrush steppe vegetation dynamics. Applications of the LTV data include:

In addition to the functions listed above, the LTV data set is still used to assess the impacts of energy development on the environment, as was intended in 1950. However, impacts beyond radioactive fallout, such as exotic species invasion, habitat fragmentation, and global climate change are of current interest.

Long-term Vegetation Transects and Permanent Plot Locations on the INL Site. Wildland fires depicted are from 1994-2016. 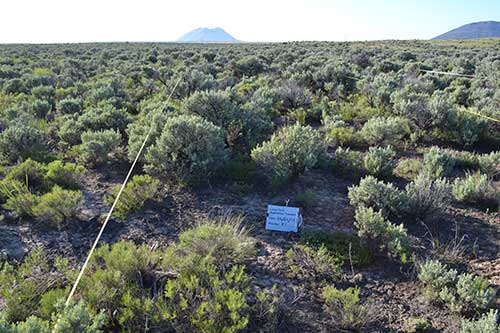