The principle of TLD technology is that when certain crystals are exposed to penetrating gamma radiation, impurities are excited to high energy states and remain in these states at normal ambient temperature. When the TLDs are heated, electrons are released and the crystal returns to the lower state of energy. The released electrons are in the form of photon energy, which is measured with a photomultiplier tube; the light intensity is proportional to the absorbed dose of radiation and is reported in the unit of Roentgen.

TLDs have been used historically to measure exposures in air to ambient ionizing radiation. In November 2011, ESER began to collocate OSLDs with TLDs. The OSLDs are a relatively new technology. The method makes use of electrons trapped between the valence and conduction bands in the crystalline structure of certain minerals. The trapping sites are imperfections of the lattice. Radiation energy deposited in the material promotes electrons from the valence band to the conduction band. These electrons move to traps in the band gap. The greater the radiation energy absorbed (dose), the greater the number of trapped electrons. When it is time to assess the dose, the trapped electrons are freed by exposing the dosimeter to light. When the electrons are freed, they fall to a lower energy level and emit light photons. The intensity of the emitted light is measured and used to calculate the dose. The reported unit is mrem or ambient dose. Not all the electrons are freed from their traps. If the light output from the OSL dosimeter is analyzed over a short period of time, many electrons will remain trapped. This means that the dosimeter can be reread many times without a significant loss of signal. TLDs can only be read once. 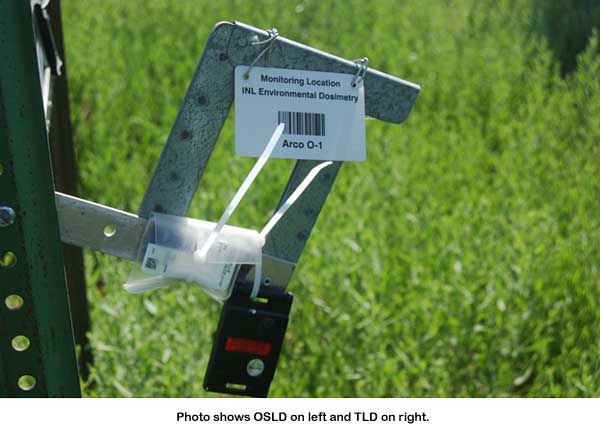 The ESER Program maintains optically stimulated luminescent dosimeters (OSLDs) in the same locations as the TLDs to run a side-by-side comparison of the two dosimeter technologies. Two OSLDs are in place at each location. TLDs and OSLDs are changed out at the beginning of May and again at the beginning of November after six months in the field. Both sets of dosimeters are currently analyzed by the ISU Environmental Assessment Laboratory. 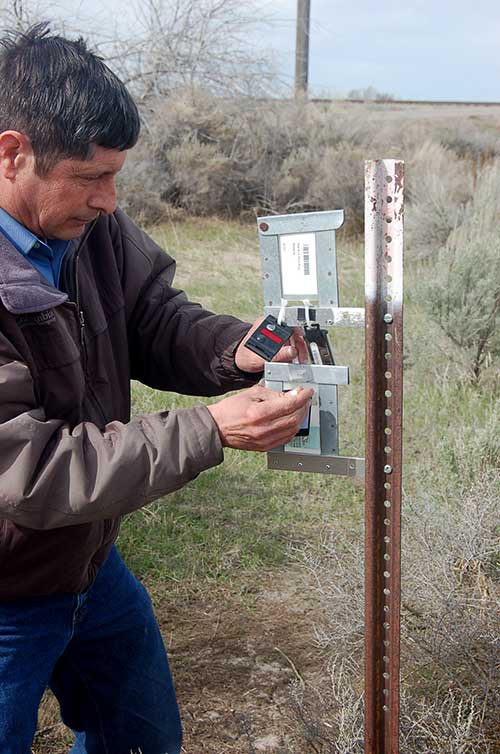